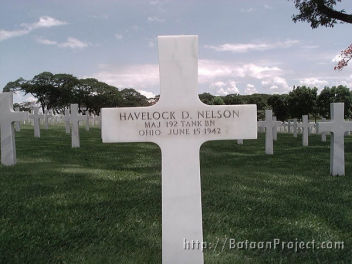 Major Havelock D. Nelson was born in March 27, 1898, to Horatio H. Nelson & Nora B. Brewer-Nelson in Canton, Ohio.  With his two sisters and two brothers, he grew up in Canton and Springfield, Ohio.  He attended Wittenberg College and the University of Cincinnati for his masters degree.  While there, he played football.  He was married to Kathleen and was the father of two children; Kate and Leslie.  He was known as “Harvey” to his family and friends.

It appears that Nelson joined the Army Reserve.  Sometime after 1935, Nelson and his family moved to Manhattan, Kansas, where he worked as a bookkeeper at a bank.

It is not known when he joined the U. S. Army, but it is known he was assigned to HQ Company, 192nd Tank Battalion (Cavalry) when it was created in January 1941.  He was assigned to the company as its commanding officer.  During the late summer of 1941, Nelson and the rest of the battalion took part in maneuvers in Louisiana.  It was after these maneuvers at Camp Polk, that he and the rest of the battalion learned they were being sent overseas.

In late October 1941, Nelson left the United States from Angel Island in San Francisco Bay.  After stops in Hawaii and Guam, his battalion arrived in the Philippines two weeks before the attack on Clark Field.  At some point after arriving in the Philippines, he was promoted to major and gave up his command of HQ Company.

After arriving in the Philippines on December 1, 1941, Major Nelson, Captains Burholt, Hanes and Poweleit were sent north to Lingayen Gulf to do reconnaissance on the area.  Everyone knew that war was coming, they just did not know when it would come.  The four men noted that the defenses from the gulf to Damortis were excellent, but from there the defenses were none existent.  The men believed if the Japanese landed in the area, that they could make their way around the defenses and attack from behind.  None of this information was taken seriously higher up in the military organization.

Maj. Nelson lived through the bombing of Clark Airfield on December 8, 1941.  At first, the Americans believed that the planes were coming to reinforce them.  It was when the bombs began exploding that the soldiers knew the planes were Japanese.

Cecil Vandiver, a cook with D Company, wanted to see what was going on during the attack, so he stood up.  As he stood watching, the trees around him began exploding and showering him with red wood.  Nelson seeing Vandiver ordered him to take cover.

During the battle for the Philippines, Nelson served as the Executive Officer for Headquarters Company.  When Bataan was surrendered, Maj. Nelson became a Prisoner Of War.  He took part in the death march.  At one point on the march, Nelson was weak enough to require help from other members of the 192nd.  One of the members of the battalion to help him was Joe Lajzer of B Company. According Lt. Kenneth Bloomfield of A Company, in a roster of the 192nd that he kept as a POW,  Nelson was so weak that he thought that he had died on the march.

At one point, Nelson fell on the march.  He was beaten repeatedly by a Japanese guard.  When Nelson would not get up, he was allowed to lay on the ground until he could continue the march.

Ironically, Grover Brummett stated that during the march, Nelson constantly encouraged the other members of the 192nd to keep going.  According to Brummett, Nelson made his way among the men and talked to them to keep their spirits up.  He told them that he knew that he knew they could make it.

Nelson and the other POWs were held at Mariveles for one day before being loaded onto small wooden boxcars.  The cars had room for forty men or eight horses.  The Japanese crammed 100 men into each car.  The prisoners disembarked the cars at Capas.  There Japanese soldiers were offering Japanese money to the POWs to buy food.  Nelson walked the last few miles until he arrived at Camp O’Donnell on April 18th.  It had taken him about six days to complete the march.

According to the research done by his family, there are two versions of what happened to Harvey.  In the first version when the POWs arrived at Camp O’Donnell, they were ordered to form ranks and were searched once again.  Any prisoner found with an item that was Japanese was ordered to go to another area and create ranks there.  During the search, Nelson was found to be carrying a Japanese coin and sent to the second formation.  The POWs sent to this formation were later shot.

It should be noted that Lt. Jack Merrifield was present when Nelson reached Camp O’Donnell.  According to Merrifield, the Japanese went through Nelson’s baggage and found a Japanese battle flag.  This fact was confirmed by Capt. Alvin Poweleit.

The Japanese executed any American found with Japanese “war prizes.” According to Capt. Alvin Poweleit, the 192nd’s chief medical officer. Nelson, with three other men, was shot.  After being shot several times, Nelson did not die.  Poweleit reported that the Japanese buried him, but that he crawled out of the grave.  He was helped by friendly Filipinos and turned over to guerrillas.  He spent nineteen months with the guerrillas before coming down with dysentery and dying.

In the second story, Grover Brummett stated that upon reaching Camp O’Donnell, Nelson collapsed.  Brummett, who was also a member of the 192nd, believed Nelson had died of a heart attack.  Nelson was taken to the camp cemetery where, as it turned out, he was buried alive in a slit trench from which another POW and Nelson escaped and went into the mountains.  During this time, he was cared for by a Mr. Ocampo.

Nelson’s daughter, Kate, would travel to the Philippines after the war and meet the man who cared for her father.  After almost two months of suffering,  Maj. Havelock D. Nelson died from his wounds on June 15, 1942.  It is known that Major Havelock Nelson is listed as a guerilla

in Zambales during the opening months of 1942. His wife and family did not learn of his death until sometime during 1945. On November 2, his wife received a letter from Gen. James Weaver. In the letter, he told Kathleen of her husband’s death. She also received a letter from a Filipino who had cared for her husband after he had escaped. In his letter, he stated Havelock died from malaria.

May 1942, Havelock's family received this correspondance from the War Dept.

“According to War Department records, you have been designated as the emergency addressee of Major Havelock D. Nelson, O,253,369, who, according to the latest information available, was serving in the  Philippine Islands at the time of the final surrender.

“I deeply regret that it is impossible for me to give you more information than is contained in this letter.  In the last days before the surrender of Bataan, there were casualties which were not reported to the War Department.  Conceivably the same is true of the surrender of Corregidor and possibly other islands of the Philippines.  The Japanese Government has indicated its intention of conforming to the terms of the Geneva Convention with respect to the interchange of information regarding prisoners of war.  At some future date, this Government will receive through Geneva a list of persons who have been taken prisoners of war.  Until that time the War Department cannot give you positive information.

“The War Department will consider the persons serving in the Philippine Islands as “missing in action” from the date of surrender of Corregidor, May 7, 1942, until definite information to the contrary is received.  It is to be hoped that the Japanese Government will communicate a list of prisoners of war at an early date.  At that time you will be notified by this office in the event that his name is contained in the list of prisoners of war.   In the case of persons known to have been present in the Philippines and who are not reported to be prisoners of war by the Japanese Government, the War Department will continue to carry them as “missing in action” in the absence of information to the contrary, until twelve months have expired.  At the expiration of twelve months and in the absence of other information the War Department is authorized to make a final determination.

“Recent legislation makes provision to continue the pay and allowances of persons carried in a “missing” status for a period not to exceed twelve months;  to continue, for the duration of the war, the pay and allowances of persons known to have been captured by the enemy; to continue allotments made by missing personnel for a period of twelve months and allotments or increase allotments made by persons by the enemy during the time they are so held;  to make make new allotments or increase allotments to certain dependents defined in Public Law 490, 77th Congress.  The latter dependents generally include the legal wife, dependent children under twenty-one years of age and dependent mother, or such dependents as having been designated in official records.  Eligible dependents who can establish a need for financial assistance and are eligible to receive this assistance the amount allotted will be deducted from pay which would otherwise accrue to the credit of the missing individual.

July 1942, the family received this letter from the War Dept

The last report of casualties received by the War Department from the Philippines arrived early in the morning of May 6. Through this date, Major Havelock D. Nelson had not been reported as a casualty. The War Department will consider the persons serving in the Philippine Islands as “missing in action” from the date of the surrender of Corregidor, May 7, until definite information to the contrary is received.

“Efforts to secure prisoner of war lists from the Philippines have not been successful to this date due to the lack of communication and the fact that the Japanese Government has not yet given permission for the Swiss representative and the International Red Cross delegates to make visits to prisoner of war camps in the islands. When the lists of prisoners are received, we will clear the name of your son and send you any additional information that we may have.

Major Havelock D. Nelson was buried in Plot N, Row 18, Grave 176, at the American Military Cemetery outside of Manila. He was posthumously awarded the Silver Star and Legion of Merit.